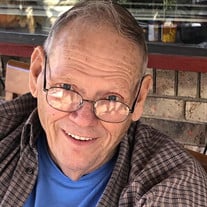 Duane was born in Nevada City, California on December 17, 1947. He was one of five children born to Chester and Opal (Sale) Inlow. He passed from this life and moved into his eternal home on Monday, February 1, 2021 in Miami, Oklahoma, at the age of 73. Duane went to school in Afton and Grove and graduated high school in Tulsa in 1967 with his twin sister Elaine. He joined the United States Army right after high school and was stationed in Anchorage, Alaska. He was trained as a truck driver and transported tanks and heavy equipment from Fairbanks to Anchorage where they were placed on boats and shipped to Vietnam. Duane was very proud of his military status and enjoyed spending time at the VFW. After the military, Duane became a long haul truck driver traveling from coast to coast. He worked with his father Chester and brother Ronnie driving family trucks. Later, he bought his own trucks and drove for most all of his life. He was very proud of his trucks and went by the handle “Thunderbolt”. He loved watching trucking movies (Smokey and the Bandit, for one) and listening to trucker songs and country music. He became an excellent mechanic and could fix just about anything. Duane worked hard to provide for his family. He never married and had no children of his own. Duane “Uncle Bud” considered his nieces and nephews as his children and later his great nieces and nephews, many of whom would call him Grandpa Bud. Duane is survived by: 1 Sister, Judith Hilliard, Broken Arrow OK 8 Nieces and Nephews: Shonna Stovall, Traci Williams, Ronda Pruitt, Shelli Carleton, Janice Collier, Debra Hutto, Terri Pierson, Lee Inlow 21 Great Nieces and Nephews: Lexi Stovall, Hanna Stovall, Jeremy Stovall, Zach Stovall, Amanda Stovall, Steven Vargas, Christopher Vargas, Ashlee DeRyke, Logan Carleton, Kyle Carleton, Ashley Pruitt, Nicole Kenworthy, Crystal Pitre, Robert Sawyer, Rosalee Conner, Fernando Conner, Angel Conner, Chacho Conner, Brittany Ellerick, Aarron Vaughn, and Jessica Vaughn. 30 Great-Great Nieces and Nephews Those preceding him in death are: His parents, Chester Lee Inlow and Opal Isabelle Sale Inlow Sisters, Janice Rae Inlow, Virginia Elaine Slaughter Brother, Ronald Lee Inlow Graveside Services will be held at Buzzard Cemetery in Grove, OK on Saturday, March 6, 2021 at 2:00 PM with Pastor Leon Weece officiating.

Duane was born in Nevada City, California on December 17, 1947. He was one of five children born to Chester and Opal (Sale) Inlow. He passed from this life and moved into his eternal home on Monday, February 1, 2021 in Miami, Oklahoma, at... View Obituary & Service Information

The family of Harold Duane Inlow created this Life Tributes page to make it easy to share your memories.

Send flowers to the Inlow family.