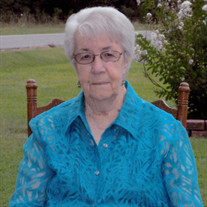 Gladys Jenora Heppner of Afton, OK passed away on Friday, February 14, 2020 at the age of 98 Gladys was born on August 16, 1921 in Butterfield, Minnesota to Seymour & Emma (Hunstad) Anderson. She graduated high school in 1939 from Butterfield... View Obituary & Service Information

The family of Gladys J. Heppner created this Life Tributes page to make it easy to share your memories.

Send flowers to the Heppner family.