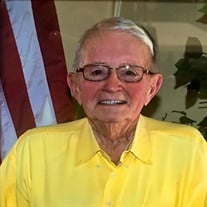 Gerald Raymond Tipton, 85, who was a life-long resident of Fairland went to be with his Savior after a six month battle with cancer on June 4, 2019 at Clarehouse Hospice in Tulsa. Gerald was born on March 15, 1934 in Grove, Oklahoma to George and Zenobia Tipton. After high school, he married the love his life, Wanda Gardner on April 20, 1955. He served in the United States Army completing basic training at Fort Ord in Monterey, California and was stationed at Ft. Lewis in Tacoma, Washington from 1955-1957. Upon his completion of service to his country, he and Wanda returned to Fairland to start a family. Gerald was employed by BF Goodrich in Miami from 1957 until its closure in 1986. He then went on to serve the Ottawa County Southern District until his retirement in 1997. In addition, he served on the City Council and was Mayor of Fairland from 2008-2011. Throughout the years, he also owned and operated Tipton’s VW Repair and Used Cars in Fairland. Gerald loved spending time with his family and attended the First Baptist Church of Fairland. He spent the final years of his life in Collinsville, Oklahoma to be closer to his children. He was preceded in death by his wife of 58 years, his parents and two sisters, Veva Tipton and Mary Katherine Earls. Gerald is survived by his two daughters, Cheryl Risenhoover and her husband Barbarosa of Collinsville, Charlotte Mindeman of Tulsa; two sons, Rick Tipton and his wife Rhonda of Tulsa, Greg Tipton and his wife Diana of Norman; grandchildren Erikka Ault of Edmond, Tiffany DeSautell of Tulsa, Austin Risenhoover of Danville, California, Kacy Summers of Collinsville, Lindsay Hurst of Sapulpa, Parker and Rachel Tipton of Norman and Alex and Tyler Cullison of Norman; twelve great-grandchildren; his brother, Frank Tipton of Fairland; sister-in-law, Bobbie Gardner of Bella Vista, Arkansas as well as numerous loving nieces, nephews and his dear friends. The family would like to extend special thanks to the staff of Town Village Retirement Center in Tulsa for an amazing six months, the staff of Millennium Healthcare and Hospice and Clarehouse. A memorial service will be held at 2:00 p.m. on Monday, June 10th at the First Baptist Church of Fairland. Interment will follow at the Fairland Cemetery under the care of Brown-Winters Funeral Home and Cremation Service in Fairland. In lieu of flowers, the family asks that direct donations be made to Clarehouse Hospice, 7617 S. Mingo Road, Tulsa, OK 74133. Friends and family may send the family notes and videos of encouragement by viewing Mr. Tipton’s Tribute Page at www.brown-winters.com.

Gerald Raymond Tipton, 85, who was a life-long resident of Fairland went to be with his Savior after a six month battle with cancer on June 4, 2019 at Clarehouse Hospice in Tulsa. Gerald was born on March 15, 1934 in Grove, Oklahoma to George... View Obituary & Service Information

The family of Gerald Raymond Tipton created this Life Tributes page to make it easy to share your memories.

Gerald Raymond Tipton, 85, who was a life-long resident of Fairland...

Send flowers to the Tipton family.