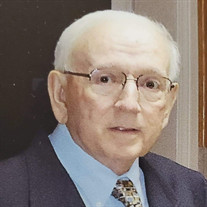 George E. Weaver of Fairland, Oklahoma passed away on April 1, 2022, at his residence. He was 82. Mr. Weaver was born June 21, 1939, in Welch, Oklahoma to Charles C. Weaver and Elaine P. Weaver (High). He graduated from Fairland High School in 1957 and attended NEO A&M College in 1959. After graduating from NEO, he attended Northeastern State University, graduating with a master’s in education. He taught school at McDonald County High School. While living in Southwest City, Missouri he met Melba Barnes whom he married on November 28, 1963. In 1969 George began teaching at NEO A&M College and retired after 27 years. While at NEO he was the Chairman of Business, Computers and Industrial Service and served as president of the Faculty Association. He also served on the Oklahoma Jr. College Association as the election chair and connection chair. He served on the Fairland Economic Development Authority and the Miami Area Economic Development Service, Inc. boards. He was also a member of the Lions Club for 30 years, a founding member of the Fairland Public Schools Enrichment Foundation and Fairland Alumni Association. He received the first “Outstanding Alumni Award.” He served as Deacon and Music Director at First Baptist Church in Fairland for years. He is preceded in death by his parents Charles and Elaine Weaver, a brother Jim Charles Weaver and his wife Melba Weaver. He is survived by his son Robert Weaver and his wife, Melanie of Fairland, his daughter Tami Weaver (Geary) and her husband Dan of Pembroke Pines, Florida. His grandchildren include Cameron Weaver and his son David Weaver, Miranda Weaver and her son Korbin, Alex Weaver and her sons Robby Weaver, James Weaver, Xander Mulleneaux, Bodhi Mulleneaux and Decklyn Mulleneaux, Tiffanie Weaver and her son Ryland Grimm, C.J. Weaver, Victoria Frye and her sons Zayden and Raymond Frye, Taylor Mercer and her husband Garett and their son Alaric, along with a close family friend Trent Ryan and his wife Jordan and son William. There will be a Celebration of Life for George at 11:00 AM on Monday, April 11, 2022 at First Baptist Church in Fairland with Reverend Andy Krebs officiating. Interment will follow at the Fields Cemetery East of Grove. Friends and family may send the family notes of encouragement by viewing Mr. Weaver's Tribute Page at www.brown-winters.com.

George E. Weaver of Fairland, Oklahoma passed away on April 1, 2022, at his residence. He was 82. Mr. Weaver was born June 21, 1939, in Welch, Oklahoma to Charles C. Weaver and Elaine P. Weaver (High). He graduated from Fairland High School... View Obituary & Service Information

The family of George E. Weaver created this Life Tributes page to make it easy to share your memories.

George E. Weaver of Fairland, Oklahoma passed away on April 1,...

Send flowers to the Weaver family.