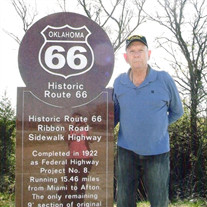 Gale C. Black, 92, a longtime Miami resident passed away on Saturday, May 4, 2019 in Joplin, Missouri. He was born in Quapaw, Oklahoma on June 27, 1926 to Earl Richard and Anna (Campbell) Black. He left high school and entered the United States Army. He was the rank of Private First Class. After the military Mr. Black completed high school and attended NEO A&M College where he graduated with his Associates of Arts. He worked for thirty-six years at B.F. Goodrich where he rose from tire builder to Management. Gale lived in Ottawa and Craig counties, between Picher, Commerce, Welch and Miami. Gale enjoyed fishing, golfing and gardening, he also enjoyed singing, visiting with friends, and he took an active role to help keep Route 66’s history alive in the Miami area. Mr. Black was preceded in passing by his parents Earl and Anna Black, his brothers Bob Black and Earl Black and sister in law Helen Black along with a son Robert Lynn Black. Those left to carry on Gale’s legacy are his wife Julia Black of the home, a son Gale W. Black and his wife Janice of Quapaw, a daughter Mary Annette Black of Hawaii, a daughter Misty Gayle Shelton of Miami, a son Michael Luis Black of Santa Monica, California, a son Richard Anthony Black and his wife Rachel also of Santa Monica, California his daughter Juliana Marie Mitchell and her husband Matt of Tulsa. Gale is also survived by, a daughter in law Mitzi Black his fifteen grandchildren and six great grandchildren. Visitation is 5:00 PM until 7:00 PM Tuesday, May 7, 2019 at Brown-Winters Funeral Home and Cremation Service in Miami. Services for Mr. Black are 10:00 AM, Wednesday, May 8, 2019 at Immanuel Baptist Church in Miami. Interment will follow at the Northeastern Oklahoma Veteran's Memorial Cemetery. Services are in the care of Brown-Winters Funeral Home and Cremation Service. The American Legion Funeral Honors Team will be providing Military Honors at the cemetery. The family has asked that memorial contributions be made to the Folds of Honor at the following link https://www.foldsofhonor.org/donate or by mailing or dropping that contribution off to the funeral home. Friends and family may send the family notes and videos of encouragement by viewing Mr. Black's Tribute page at www.brown-winters.com.

Gale C. Black, 92, a longtime Miami resident passed away on Saturday, May 4, 2019 in Joplin, Missouri. He was born in Quapaw, Oklahoma on June 27, 1926 to Earl Richard and Anna (Campbell) Black. He left high school and entered the United States... View Obituary & Service Information

The family of Gale Coleman Black created this Life Tributes page to make it easy to share your memories.

Send flowers to the Black family.