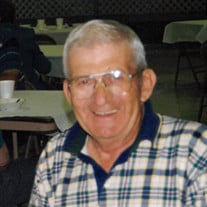 Frances Reed Whitesell Passed from this life at The Veterans Center in Claremore, Oklahoma on Monday May 9, 2022, he was ninety-one years old. He was born in Vinita, Oklahoma, his parents were Richard F (Dick) Whitesell and Leona (Reed) Whitesell. Frances was raised on the family farm near Cleora, Oklahoma. He graduated from Cleora High School where he played Baseball and Basketball. He married Martha Hart in Vinita, who had preceded him in death in January, they were married seventy years. After Marriage, Frances was drafted by the U.S. Army and was stationed in New Jersey. After the Army, they moved to Miami, Oklahoma in 1955 where he operated a Conoco Station, which is where Quad States Financial is now. Frances would later work for BF Goodrich Company for thirty-one years. He and partner JB Jones made Fancy Bee Campers for many years. After retiring he delivered for Miami Laundry and Dry Cleaners. Frances and Martha were members of the Oak Grove Baptist Church in Catoosa the past two years, and were long-time members of the First Baptist-Miami, Frances was a member of the Morgan Sunday School Class at First Baptist. He loved sports and was an avid hunter, fisherman, bowler, and umpired softball for seventeen years. Frances is survived by children Stephen D (Stubb) Whitesell of Miami, Robyn Shoun and husband Charles (Chip) Shoun of Catoosa, Oklahoma. Grand Children include: Stephen D Whitesell Jr. of Grove, Oklahoma, Brittany Dawn Whitesell of Broken Arrow, Oklahoma. Sara Alcock and husband Doug of Broken Arrow, Oklahoma, Samuel Shoun and wife Kelly of Owasso, Oklahoma, eight Great Grandchildren and one Great-Great Granddaughter. A memorial service will be Friday May 13, 2022 at First Baptist-Miami at 10 AM. Burial will follow at Glen Abby Memorial Gardens. Visitation is Thursday May 12, 2022 at Brown-Winters Funeral Home and Cremation Service in Miami from 6 P.M. to 7 P.M. Friends and family may send the family notes of encouragement by viewing Mr. Whitesell’s Tribute Page at www.brown-winters.com.

Frances Reed Whitesell Passed from this life at The Veterans Center in Claremore, Oklahoma on Monday May 9, 2022, he was ninety-one years old. He was born in Vinita, Oklahoma, his parents were Richard F (Dick) Whitesell and Leona (Reed) Whitesell.... View Obituary & Service Information

The family of Frances Reed Whitesell created this Life Tributes page to make it easy to share your memories.

Frances Reed Whitesell Passed from this life at The Veterans...

Send flowers to the Whitesell family.