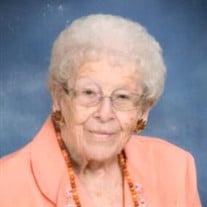 Mrs. Ella Lou Reynolds, a ninety five year old Fairland resident went to be with her Lord and Savior on Friday, June 19, 2020 at her home. In Commerce, Oklahoma on December 4, 1924. Mr. and Mrs. Jesse Broyles gave birth to a little girl and named her Ella Lou. Ella Lou Graduated from Miami High School with the class of 1942, she then enrolled at NEO A&M College. She had met her future husband Edward Eugene Reynolds in the first grade at a small country church called South Fairview. They were married on April 22, 1944 at her parents’ home. She started her teaching career with her mother in a one room school where her mother taught the upper grades and Ella Lou taught the lower grades. She later was able to attain her Bachelor’s Degree from Pittsburg State University in 1950. Mrs. Reynolds was very involved in the community, Ella Lou was the clerk at Hudson Creek Baptist Church, belongs to the American Legion Auxiliary, through her father’s service in World War I, belongs to a teacher’s sorority Kappa Kappa Iota, a Women’s Missionary Group, the Retired Educators, Home and Community Education (HCE) which includes helping with the Ottawa County Fair. She has served as a Department Superintendent of exhibits for years and still helps with exhibits and 4-H events. She also volunteered once a month as a receptionist at the Dobson Museum. She organized a support group for area widows called ‘The Uniques’ in 2002 that meets once a month at the Fairland Senior Center for lunch. She also organizes the Broyles family reunion and class reunions. Mrs. Reynolds was preceded in passing by her parents Jesse and Grace (McBee) Broyles, her husband Edward Eugene Reynolds, her son Eddie Reynolds, her son in law Jerry Campbell and three great grandsons. Those left to continue Mrs. Reynolds legacy are her children Charles Reynolds and his wife Mary Frances of Fayetteville, Arkansas, David Reynolds and his wife Sandy of Fairland, Lujean Campbell of Miami, a daughter in law Patricia Reynolds, a sister Ruth McCord of Miami, her eleven grandchildren Jeff Reynolds and his wife Tonya of Fairland, Jerry Reynolds and his wife Melanie of Springdale, Arkansas, Jennifer Reynolds Centerton, Arkansas, Jana Reynolds of Fayetteville, Arkansas, Anthony Reynolds and his wife Lola of Miami, Carrie Farris and her husband Gary of Goddard, Kansas, Kellie Allemann and her husband Jeff of Fairland, Rodney Reynolds and his wife Sandy of Afton, Justin Campbell and his wife Mandy of Grove, Jared Campbell and his wife Ashley of Fairland, and Kelsey Campbell and Jason Adair of Miami, her eighteen great grandchildren, two brother in laws Gale Reynolds of Miami, Dick Reynolds and his wife Kathy of Englewood, Colorado and a sister in law Betty Reynolds of San Antonio, Texas. Visitation will be Monday, June 22, 2020 from 6-8 PM at Brown-Winters Funeral Home and Cremation Service in Miami. There will be a Celebration of Life on Tuesday, June 23, 2020 at 2:00 PM at First Baptist Church in Miami with Pastors Steve Patterson and Marty McCord officiating. Interment will follow at the Fairland Cemetery. Casketbearers will be her grandsons. Honorary Casketbearers will be her granddaughters. Friends and family may send the family notes of encouragement by viewing Mrs. Reynolds' Tribute Page at www.brown-winters.com.

Mrs. Ella Lou Reynolds, a ninety five year old Fairland resident went to be with her Lord and Savior on Friday, June 19, 2020 at her home. In Commerce, Oklahoma on December 4, 1924. Mr. and Mrs. Jesse Broyles gave birth to a little girl and... View Obituary & Service Information

The family of Mrs. Ella Lou Reynolds created this Life Tributes page to make it easy to share your memories.

Send flowers to the Reynolds family.