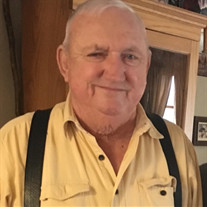 Eldon Arnold Gibson, seventy-five-year-old Narcissa, Oklahoma, resident passed away on Saturday, October 19, 2019, in Joplin, Missouri. Eldon was born on February 15, 1944, in Fairview, Oklahoma, to Irvin and Voyed (Parmentor) Gibson, the youngest of eleven brothers and sisters. Eldon proudly served his country in the United States Army. It was in the Army that he learned to be a Lineman. After the Army Eldon worked as a Lineman for REC, OG&E and the City of Miami, as well as being a rancher. He enjoyed raising thoroughbred race horses and restoring old cars. He married Lillian Carrie (Thresher) on January 23, 1970, in Alva, Oklahoma. Eldon was preceded in death by his parents, Irvin and Voyed Gibson. He is survived by his wife, Lillian Gibson, of the home; two sons, Doug Gibson and wife Lora of Afton, Oklahoma, and Jeb Jones and wife Pamela of Eufala, Oklahoma; three daughters, Kelly Koutahi and husband Charles of Oklahoma City, Oklahoma, Diana Gibson of Falls Church, Virginia, and Lillian Kittrell and husband Paul of Narcissa, Oklahoma; 11 grandchildren, Levi Gibson, Jessie Gibson, Macy Gibson, Bill Jones, Nick Jones, Sierra Jones, Miranda Koutahi, Jane Marie Koutahi, Khol Kittrell, Ian Kittrell, and Bradley Kittrell; 3 great grandchildren, Graysen Gibson, Oliver Gibson, and Liam Gibson and 1 grandchild on the way. Funeral Services will be held on Wednesday, October 23, 2019, at 10:00 am at Brown-Winters Funeral Home Chapel in Fairland, Oklahoma. Interment to follow at Williams Timberhill Cemetery in Welch, Oklahoma. Visitation will be held on Tuesday, October 22, 2019, from 5:00 p.m to 7:00 p.m. at Brown-Winters Funeral Home Chapel in Fairland, Oklahoma. In lieu of flowers, the family asks that donations be made to St. Jude’s Children’s Hospital. Notes of encouragement for the family may be left at www.brown-winters.com Services are under the direction of Brown-Winters Funeral Home and Cremation Service, Fairland.

The family of Eldon Gibson created this Life Tributes page to make it easy to share your memories.

Send flowers to the Gibson family.