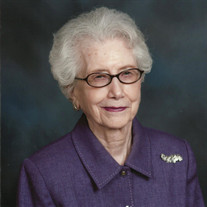 Dorothy Aline Creech, a 100 year old Miami resident went to be with her Lord and Savior on Friday, February 26, 2021 at Integris Miami Hospital. Dorothy was born on November 6, 1920 in Hunter, Oklahoma to Charles Robert and Bertha Amelia (Bayer) Buss. She was raised on a farm near Mutual and graduated from Richmond schools. She graduated from Northwestern Oklahoma State University (then Northwestern State College) in Alva with a Bachelor’s Degree in Elementary Education. , During World War II, she worked in Oklahoma City at what is now Tinker Air Force Base as a clerk. She married Danten Dayle Creech in Woodward, Oklahoma on June 5, 1947. While she taught a few years during her lifetime. Dorothy’s main love was her family, supporting her husband in his career in Oklahoma public education. They served in Fargo, Arnett, Velma-Alma, Pryor, and Oklahoma City, before moving to Miami in 1970 when Dr. Creech became president of Northeastern Oklahoma A&M College. Dorothy was an active community volunteer. She taught Sunday School, served as a cub scout leader, and many other community activities. She was a member of PEO Chapter EJ, where she served in various offices, including president. As First Lady of NEO, she was very involved in NEO Women and was supportive of plays, athletic events, and other college activities. She continued to support NEO until her death. She also enjoyed her bridge clubs and book clubs. Dorothy was a member of the First United Methodist Church in Miami where she was active in United Methodist Women. Even after she was homebound, she supported the church by preparing meals for funerals. More important than anything to her was her family, she definitely cherished her grandchildren and great grandchildren. Mrs. Creech was preceded in passing by her husband Dayle Creech, her parents Robert and Bertha Buss and two Sisters Ethel Bish and Roberta Phillips. Those left to share her 100 year legacy are her children Jan Shannon and her husband Mike of Edmond, Oklahoma, Jim Creech and his wife Pat of Miami, Oklahoma, and Dan Creech and his wife Valerie of Saint Louis, Missouri, along with her grandchildren Ryan Shannon and his wife Heather of Durango, Colorado, Julie Phelan and her husband Clay of Oklahoma City, Jay Creech and his wife Brooke of Grapevine, Texas, Matt Creech and his wife Amanda of Forth Worth, Texas, Hannah Creech of Phoenix, Arizona and Hayley Creech of Saint Louis, Missouri and great grandchildren Autumn Shannon and Dax Shannon both of Durango, and Phoebe Phelan of Oklahoma City. “I have fought the good fight, I have finished the course, I have kept the faith.” ~ II Timothy 4:7 There will be an open viewing time from 12 Noon until 8:00 PM on Tuesday, March 2, 2021 at Brown-Winters Funeral Home and Cremation Service in Miami. Mrs. Creech’s Celebration of Life will be 2:00 PM, Wednesday, March 3, 2021 at First United Methodist Church in Miami with Reverend Taud Boatman officiating. Covid restrictions, including masks, will be required at the service. Interment will follow at the Grand Army of the Republic Cemetery in Miami under the Care of Brown-Winters Funeral Home and Cremation Service in Miami. The family has asked that memorial Contributions be made to the Back Pack Program at the First United Methodist Church in Miami. Friends and family may share notes of encouragement by viewing Mrs. Creech’s Tribute Page at www.brown-winters.com.

Dorothy Aline Creech, a 100 year old Miami resident went to be with her Lord and Savior on Friday, February 26, 2021 at Integris Miami Hospital. Dorothy was born on November 6, 1920 in Hunter, Oklahoma to Charles Robert and Bertha Amelia (Bayer)... View Obituary & Service Information

The family of Dorothy Aline Creech created this Life Tributes page to make it easy to share your memories.

Send flowers to the Creech family.