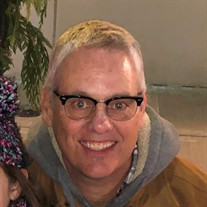 Donald "Donnie" John Durborow, 59, a resident of Wyandotte, Oklahoma passed away unexpectedly on Sunday, December 27, 2020. Donnie was born, along with his two triplet sisters, in Miami, Oklahoma on January 7, 1961 to Donald Lee and Elizabeth Louise (Benjamin) Durborow. He and his sisters were the first triplets to be born in Miami. Donnie graduated from Miami High School, Class of 1979. December 19, 1989 he married Kelly Graham. He worked many years in retail management, but was currently employed at KAMO Power, Vinita, Oklahoma. He was a hard working and devoted, loving Husband, Father, Grandfather "Poppy", Brother, Son, and Friend. Donnie was a member of the St. Peter the Apostle Catholic Church where he regularly attended mass with his loving wife, Kelly. Donnie and his son, Derek, had a loving relationship that was filled with jokes, laughter, and a shared love for music and sports. Donnie had many interests including music, singing, outdoor projects, jogging, and sports. He was a skilled musician and would often entertain others with his guitar stylings and vocals. Donnie was rarely found without a smile and his cheerful attitude spread joy to everyone around him. Donnie is preceded in death by his parents, Donald and Betty Durborow; two brothers, David and Tim Durborow; a sister, Donna Durborow; and two nieces, Timra and Jamie. Donnie is survived by his wife, Kelly, of the home; son, Derek and fiance Tiffany of Zena, Oklahoma; two brothers, Mike and Terry Durborow, one sister Dana Durborow; a granddaughter, Lyla Rose Durborow; and many nieces and nephews. A Rosary will be held at 10:00 AM on Saturday, January 2, 2021 at St. Peter the Apostle Catholic Church in Joplin, Missouri. Following the Rosary, there will be a Mass of Christian Burial at 11:00 AM. Services will be live streamed on the Brown-Winters Facebook Page. Interment will follow at St. Mary's Cemetary in Seneca, Missouri. Services have been placed in the care of Brown-Winter's Funeral Home and Cremation Service in Miami. Friends and family may send the family notes of encouragement by viewing Donnie's tribute page at www.brown-winters.com

Donald "Donnie" John Durborow, 59, a resident of Wyandotte, Oklahoma passed away unexpectedly on Sunday, December 27, 2020. Donnie was born, along with his two triplet sisters, in Miami, Oklahoma on January 7, 1961 to Donald Lee and Elizabeth... View Obituary & Service Information

The family of Donald John Durborow created this Life Tributes page to make it easy to share your memories.

Send flowers to the Durborow family.