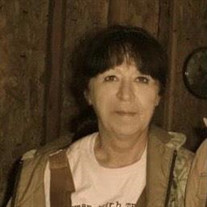 Deborah “Debbie” Darlene (Woolman) Shelby, age 67, of Wyandotte, passed away on February 5th, 2021, at home with her husband Donald E. Shelby by her side. She was born December 20, 1953 in Boulder, Colorado to the late Alfred A. Woolman and Julia B. (Anselme) Woolman. Survivors include her husband of 48 years, Donald E. Shelby; her 4 children and their spouses Catina Shelby-Bretall (Brian), Ernie Shelby (Tina), Wendy Shelby-Canfield (Jim) and Bradly Shelby(Samantha); 2 stepdaughters Teena (Shelby) Cruzan and Michelle (Shelby) Williams; her 11 grandchildren Kendyll Johnson, Kira Canfield, Mariah Pilkinton, Cody Hayes, Ella Bretall, Thomas Shelby, Holly Osborn, Kayden Shelby, Alexia Marling, Theoden Shelby, and Dante Shelby; her 8 siblings Rev. Alfred A Woolman Jr., Judith Carol, Barbara J. Kay, Alice F Lucas, Phyllis A. Mabe, Juanita M. Sasser, Edward Woolman, and Melody K. Benton; her 4 great grandchildren, and many nieces and nephews. She was preceded in death by her parents Alfred A. Woolman and Julia B. (Anselme) Woolman; her brother Donald L. Woolman. Debbie considered herself a homemaker; she devoted her life to taking care of her family and didn’t want it any other way. She raised her children to be kind, empathetic, brave, humble, and happy. Debbie was a very determined woman. Everyone who knew her, knew this to be true. So it would be wrong to say that she lost her battle because she never stopped fighting. No matter how sick she was, she was determined. Just because she’s no longer here, doesn’t mean she lost her fight. She will be deeply missed by all her loved ones. REST IN PEACE MOM! WE LOVE YOU! Debbie never wanted to be the center of attention, so any services will be private for immediate family members only.

The family of Deborah "Debbie" Darlene (Woolman) Shelby created this Life Tributes page to make it easy to share your memories.

Send flowers to the Shelby family.