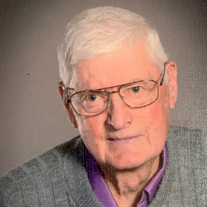 Darrell William Vanpool of Miami, OK, went home to be with the Lord on Saturday November 6, 2021, at Mercy Hospital in Joplin, MO. He was 78 yrs. old. Darrell was born on December 12, 1942, to George and Fern Vanpool. He was a life time resident of Miami. He graduated from Miami High School in the class of 1960. He attended NEO for two years and then continued his education at Oklahoma State University. In January 1966, he was drafted into the US Army and served two tours of duty in Vietnam. He married Cynthia Paula Phillips on February 3, 1968. They established their home and raised their sons in rural Miami on Vanpool Farms. They joined Miami First Assembly of God Church in June, 1980 and continue active membership there. Darrell was a licensed private pilot and with son Karger enjoyed years of interest in this hobby. In October 2019 Darrell was privileged to go on a Veterans military honor flight with his son, Davies (who follows in his dad's footsteps serving in the US military) touring Washington DC and the Vietnam Wall memorial. He was preceded in death by a sister, Kathryn Sue Vanpool and a grandson, Nathan William Vanpool. He is survived by his wife Paula of 53 years, and their two sons and their families: George Karger Vanpool and friend Becca Langley and his 4 children, Grace Kathleen Vanpool, Wesley Karger Vanpool, Elizabeth Klaire Vanpool and Lily Kate Vanpool; William Davies and wife Julie Vanpool and sons Grant Davies and wife Sydney Vanpool, Trevor James Vanpool, Zachary Daniel Vanpool, and Peyton Darrell Vanpool; two sisters, Mary Fern Souder and husband Wallie, Virginia Knapp and husband James, and one brother John Vanpool. Memorial services will be held November 24 at 10:00am at Miami First Assembly of God Church with Rev. Micah Wells and Rev. Davies Vanpool officiating. In lieu of flowers, memorial gifts may be given to First Assembly of God Church, Miami, OK; First Baptist Church in Langley, OK or to Wounded Warrior at woundedwarriorproject.org. Services have been placed in the care of Brown-Winters Funeral Home and Cremation Service in Miami. Friends and family may send the family notes of encouragement by viewing Mr. Vanpool’s Tribute Page at www.brown-winters.com.

Darrell William Vanpool of Miami, OK, went home to be with the Lord on Saturday November 6, 2021, at Mercy Hospital in Joplin, MO. He was 78 yrs. old. Darrell was born on December 12, 1942, to George and Fern Vanpool. He was a life time resident... View Obituary & Service Information

The family of Darrell William Vanpool created this Life Tributes page to make it easy to share your memories.

Darrell William Vanpool of Miami, OK, went home to be with the...

Send flowers to the Vanpool family.