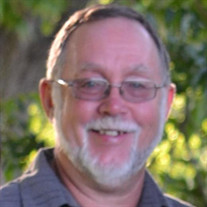 Darrell Wayne Harp came into this life on April 29, 1954 and passed from this life on December 30, 2020 in Plano, Texas with his wife Donna and son Randy at his bedside. Darrell was born at U.S Naval Hospital Great Lakes Illinois. He leaves behind the love of his life Donna Coats Harp with whom he was married to for more than 34 years. They were married at Pine Island, Zena, Oklahoma. He is survived by his wife Donna and three sons, Randy Harp and wife Maria of Roanoake, Texas, Cody Wood and wife Chele of Miami, Oklahoma, Marshall Harp and wife Jana of Miami, Oklahoma. Grandchildren, Jackson, Dallas, Victor, Callan and Brylee. He is also survived by his father Ivan Harp of Miami, Oklahoma. Darrell was preceded in death by his mother Jessie (Lansdowne) Harp and sister Karran Sue Harp. Darrell’s entire life revolved around his family, bowling, gardening and running the family farm. Darrell began his bowling career in Arkansas and later was asked to become the manager of J-Lanes in Jay Oklahoma. Darrell accepted the position and for 17 years he managed J-Lanes. In those years he made numerous friends and many many memories. In 2000 Darrell was given the opportunity to become the owner of his own center. In October Darrell became the owner of Playland Lanes in Miami, Oklahoma. Anyone who knew Darrell knew of his love for the sport of bowling. The bowling center was not a job to him, it was simply a part of him. Darrell was a past President of the Oklahoma Bowling Center Association. He was Vice Chair of the Small Bowling Center Advisory Committee. He was member of the Youth Committee, Marketing Action Committee, Strike Ten Marketing Consulting Committee and he was co-chair of Marketing for the BPAA. Darrell was notoriously known for his quick wit, humor and general smart alec comments. To tell Darrell you were going to run to Walmart or any other location would almost always be met with a comment of, “it might be quicker to drive” or “that will be something to watch”. If you were to lose something he would tell you, “I know where it’s at” and of course you would always ask where, to which the response was, “it will be in the last place you look”. It was best not to try to gain sympathy for a minor injury from Darrell because you would always be met with, “it will feel better when it quits hurting”. That of statement generally made people walk off either confused, shocked or mumbling to themselves. But how could one ever argue, it was true and for a moment they forgot their pain. His comments were never intended to hurt anyone. They were intended to make you think, make you laugh or just stun you. Watching him verbally joust with someone was always entertaining. Darrell had a huge heart. He always looked for the best in people and would try to help anyone who needed help. Want to talk baseball? Darrell loved the St. Louis Cardinals. He would talk Cardinal baseball for hours. If there were anyway to watch or listen to them he always found a way. Even when his mind should have been on other things, he would find a way to be listening to his Cardinals. He had such a love for Cardinals baseball. Christmas. Christmas was his favorite time of year. He LOVED to decorate and celebrate Christmas. It wasn’t about presents, it was about the spirit of Christmas. Of course, Santa was always able to find our home, so could airplanes. As much as the outside was decorated the inside was even more stunning. It was magical. He made lasting memories for his family. He also loved to garden in the Spring. He enjoyed spending hours and hours growing his vegetables especially his tomatoes, so much so he even had a competition with a friend each year. The last few years Darrell enjoyed running the family farm and raising the cattle. But his biggest love was that of his family. No matter how many hours he worked, he made time for his wife, children and grandchildren. He loved spending time with each and every one of them. Darrell will be greatly missed, not by just his family but also by the many many friends he has made through the years. His memory will live in our hearts and minds for many years to come. Dance with the Angels Darrell. We will see you again. Services will be 10:00 AM on Tuesday, January 5, 2021 at Brown-Winters Funeral Home and Cremation Service in Miami. Friends and family may send the family notes of encouragement by viewing Mr. Harp's Tribute Page at www.brown-winters.com.

Darrell Wayne Harp came into this life on April 29, 1954 and passed from this life on December 30, 2020 in Plano, Texas with his wife Donna and son Randy at his bedside. Darrell was born at U.S Naval Hospital Great Lakes Illinois. He leaves... View Obituary & Service Information

The family of Darrell Wayne Harp created this Life Tributes page to make it easy to share your memories.

Send flowers to the Harp family.