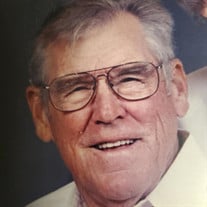 Dale Clinton Overton, 97, a resident of Fairland, Oklahoma passed away on Monday, January 25, 2021 at home. Dale was born in Buxton, Kansas to Clinton Arthur and Ethel (Meadows) Overton. When he was able Dale joined the United States Army during World War II, he spent most of his time in the Philippines. Mr. Overton owned Dales Body Shop and was in that business until his retirement. He and his wife of 68 years Louise (Miller) Overton enjoyed being on the lake, Louise preceded Dale in passing. They RV’d and camped all over the country. Dale enjoyed fishing and was an avid woodworker. June 4, 2017 Dale was blessed with a second love and married Francis Turner. They lived in the Fairland area and enjoyed their families and attending Bar None Cowboy Church. Mr. Overton was preceded in passing by his wife Louise Overton and a sister Otha Grundy. Survivors include his wife Francis Overton, his two sons Jerry Overton and his wife Dianna of Bernice, Oklahoma and Bob Overton and his wife T of Independence, Kansas, his six grandchildren, eleven great grandchildren and eight great great grandchildren. Dale was also survived by his step children and grand children, his five step-children Teresa Mahurin and her husband Richard, Lisa Lewis and her husband Johnny, Retha Snow and her husband Stephen, James Turner and his Wife Teresa, Dewayne Turner and his wife Julie, thirteen step-grandchildren, his nineteen step-great grandchildren and two step-great great grandchildren. There will be a viewing on Thursday, January 28, 2021 from 9:00 AM until 5:00 PM at Brown-Winters Funeral Home and Cremation Service in Afton. Graveside services for Mr. Overton will be 11:00 AM, Friday, January 29, 2021 at Oak Hill Cemetery in Elk City, Kansas with Pastor Rick Kyles officiating. The family has asked that memorial contributions be made to Freeman Heart Institute or the American Heart Association. Friends and family may send the family notes of encouragement by viewing Mr. Overton’s Tribute Page at www.brown-winters.com.

Dale Clinton Overton, 97, a resident of Fairland, Oklahoma passed away on Monday, January 25, 2021 at home. Dale was born in Buxton, Kansas to Clinton Arthur and Ethel (Meadows) Overton. When he was able Dale joined the United States Army during... View Obituary & Service Information

The family of Dale Clinton Overton created this Life Tributes page to make it easy to share your memories.

Send flowers to the Overton family.