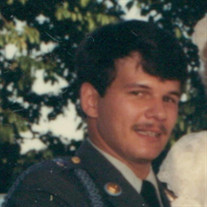 Dale Paul Curry, of Quapaw, OK, age 56, passed away Tuesday, December 22nd, 2020 at Integris Baptist Medical Center, in Oklahoma City, Oklahoma. Dale was born on December 6th, 1964 in Picher, Oklahoma to Dorothy Jean Carrier. Dale was a Picher Cardin Gorilla up until May of 1983, at which time he joined the United States Army at seventeen years old. He was stationed at Fort Benning, Georgia Army Training Center (Infantry). He was attached to Company C 8th Battalion 2nd Division Infantry Training Brigade in the summer of 1983. He graduated top of his class. Dale returned to Oklahoma to join the Oklahoma National Guard, Thunderbirds Infantry Division at Miami, Oklahoma in 1983. During which time Dale also graduated from Columbus Unified High School in May of 1985. Dale was with the National Guard Thunderbird Infantry up until 1987. In June of 1987 Dale married the love of his life, Becky (Butler) Curry, of Miami, OK. In August 1987, he joined Active Duty, He and Becky were stationed at Fort Carson, Colorado HHC 4ID from 1987 to 1994. He was one of eight who was selected to be attached to the 101st Airborne as a door gunner on a Chinook for Desert Storm, prior to his orders he and Becky found out they were expecting their first child. Dale was a Gulf War – Desert Storm War Veteran. After Dale’s time in service, he returned home to the four states. After returning home Becky & Dale welcomed their Son and raised their family. Dale graduated with Phi Theta Kappa honors from Labette Community College in May 2006. He was amongst the top 30 in his class. He was employed as a Radiologic Technologist by Mercy Maude Norton Hospital, Columbus, KS and most recently, Integris Baptist Hospital, Miami, Oklahoma. Dale loved God, his family & Country in addition to trips to Canada with long time buddy, Chuck Ritter, Camping trips, boating with family and friends and working on the family farm. Dale supported and enjoyed watching Katrina and Joshua through the years in sports, 4-H activities, rodeo and county fairs. His passion for sports included the Oklahoma Sooners and Kansas City Chiefs football. He was a large supporter of hometown football, and looked forward to Friday night lights high school football games with the Columbus Titans & Quapaw Wildcats. His booming voice and could be heard throughout the stands. Dale is preceded in passing by his mother, Dorothy Carrier, step-dad Leonard Miller, father Charles L. Taylor, and Grandmother “Mom” & Grandpa Carrier. Survivors that will carry Dale’s memory are his wife, Becky of 33 years, daughter Katrina (Curry) Elliott and husband Cody of Quapaw, OK. Son, Joshua Curry of the home, brothers Rick Carrier and wife, Sheila, Sam Miller, Texas. Sister Glenda Buzzard, Texas. Grandchildren Sedona Elliott and Draydon Curry, the family of Charles L Taylor, Illinois, Chuck and Melissa Ritter, Ohio, and the Gordon Hyde family, Colorado and several aunts, uncles, cousins, nieces and nephews. The service will be at 2:00 pm on Monday, January 4th, 2021 at Fort Gibson National Cemetery in Fort Gibson, Oklahoma and have been placed in the care of Brown-Winters Funeral Home Services in Miami, Oklahoma. The family will have a planned celebration of life at a later date. In lieu of flowers, donations can be made to the Veterans of Foreign Wars in Miami, Oklahoma or Columbus, KS.

The family of Dale Paul Curry created this Life Tributes page to make it easy to share your memories.

Send flowers to the Curry family.