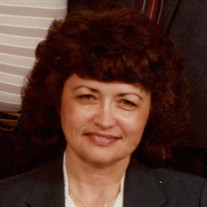 Kay Sample, a long- time resident of Hudson Creek, was received into the arms of Jesus in the early morning hours of Saturday, February 1 in her home. She was 76 years old. Kay was born to Edna (Cowley) Miller and O.B. Miller on July 16, 1943 in Cleburne Texas. On February 19, 1960, Kay married her high school sweetheart Jim Sample. Jim and Kay lived in the Hudson Creek area the remainder of their lives. Jim preceded her in death on December 9, 2010. Kay considered herself a servant and used her employment as opportunities to serve others selflessly and considered them to be her ministry while on Earth. Some of these jobs included working as a cook in the Fairland Public school system and most recently delivering meals to homebound senior residents of Ottawa County. She truly cared about these residents; taking them meals from the family table on holidays when she knew they would not have any food or family to share with. She also was a faithful member of the First Christian Church in Miami. Kay enjoyed her family and was a farm girl at heart. She loved working in the garden, tending her flowers and watching the hummingbirds come up to the house, immersing herself in God’s word, spending time with her family, and even though she would not admit it, she had a soft spot in her heart for animals including her rescue pets Sue and Fluff, and her most cherished pet Sassy who she loved just like a child. Although Kay is no longer with us, she leaves behind a wealth of friends and family to carry on her legacy including her daughters: Kandy Loehr of Branson Missouri, Tisha and Son-in-law Jason Pierce of Miami Oklahoma, 1 grandson, Andrew Loehr of Branson Missouri, and 1 Aunt, Anna Jean Cowley of Wi chita Falls Texas. In addition she leaves behind a host of nieces, nephews, neighbors, lifelong friends, and church family. Kay was preceded in death by her husband Jim, her parents O.B. and Edna Miller, her step-father James Bemis, two sisters, Bonnie Vermillion and Leta Jo Hebert, and one step-brother Marvin Bemis. Those who are honoring the family by serving as pallbearers include: Jeff Sample, Marion Crockett, Jeremy Foust, Eric Cagle, Eric Crockett, and Jason Pierce. The family will receive friends during visitation which will be held on Thursday, February 6, from 5:00-7:00 P.M. at the First Christian Church chapel in Miami. Funeral services will be at 2:00 on Friday, February 7, at the First Christian Church with the Reverend Leon Weece and Associate Pastor Jared Joslin co-officiating. Interment will follow at GAR cemetery. Online guestbook and condolences are available through: www.brown-winters.com Funeral Services will be under the direction of Brown-Winters Funeral Home and Cremation Service, Miami.

Kay Sample, a long- time resident of Hudson Creek, was received into the arms of Jesus in the early morning hours of Saturday, February 1 in her home. She was 76 years old. Kay was born to Edna (Cowley) Miller and O.B. Miller on July 16, 1943... View Obituary & Service Information

The family of Cynthia Kay Sample created this Life Tributes page to make it easy to share your memories.

Send flowers to the Sample family.