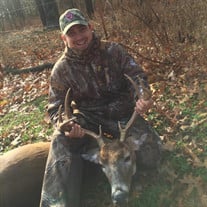 Christopher Paul Deaton, thirty-eight year old Wyandotte, Oklahoma resident passed away Tuesday, July 7, 2020. Chris was born on July 23, 1981 in Miami, Oklahoma to Ronald and Carolyn (Austin) Deaton. He graduated from Grove High School and worked for many years as a machinist for JAG Machine. Chris married Erin Meyer on June 14, 2014 in Wyandotte, Oklahoma. He spent his weekends watching Sooners games and being with family. He was also an avid outdoorsman who loved to hunt and fish. Christopher is preceded in death by his grandparents, Lloyd and Pauline Deaton, as well as his grandfather, Robert Austin. Christopher is survived by his loving wife Erin, his two children, Kaylee and Koda, his parents, Ronald and Carolyn Deaton of Wyandotte, Oklahoma, four sisters, Misty Deaton and Michael Pellegrino of Wyandotte, Oklahoma, Wendy and Michael Wyrick of Fairland, Oklahoma, Stormy and Joshua Bergmann of Grove, Oklahoma, and Haley and Ian Vancuren of Grove, Oklahoma, mother-in-law, Cheryl Meyer, brother-in-law, Daniel Hudson, sister-in-law, Chelsea Ball, as well as several nieces and nephews. Private family services will be held at a later date. Services are under the direction of Brown-Winters Funeral Home and Cremation Service in Miami, Oklahoma.

The family of Christopher Paul Deaton created this Life Tributes page to make it easy to share your memories.

Send flowers to the Deaton family.