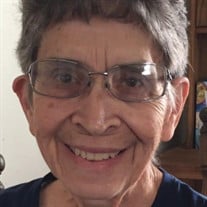 Carol Mae (Hill) Sanford, 77, went to be with Jesus on Sunday, January 24, 2021 surrounded by her family. Carol was born on March 1, 1943 in Clay Center, KS to Wayne and Ruby Hill. She grew up on the family farm working alongside her Dad. She graduated from Clay Center Community High School in 1961. Also, in 1961, Carol married the love of her life Glen Sanford on November 19. Carol & Glen moved throughout the Midwest and settled in Miami, OK. She worked at various jobs, but the last 15 years were spent working at the Medical Records office of Integris Baptist Medical Center in Miami and retired in 2012. Carol was an amazing cook and enjoyed cooking for those she loved. Family favorites included her homemade rolls, as well as cinnamon rolls she would send to her sisters for Christmas every year. She loved being outside around the farm animals. She was the hardest working woman her family knew and would give 110% effort to whatever task she was doing. Carol grew up attending Mizpah United Methodist Church in Wakefield, KS and her last church home was Cowboy Junction Church in Vinita, OK. Carol was proceeded in death by her parents Wayne and Ruby, as well as her brother Daryl. She is survived by her husband of 59 years Glen of the home, son Kevin Sanford and his wife Debbie of Fairland, OK and daughter Pamela Melaven of Webb City, MO. Also surviving are her sisters Jolene (Martin) Mechtly of Colorado, Kathy (Bryan) Joyce of Texas, grandchildren Whitney (Noah) Fields of Douglas, WY, Paige Melaven of Webb City, MO, Dillon (Ginna) Sanford of Peggs, OK, Delaney (Tanner) Salva of Tokyo, Japan, Makayla (Jeremy Shaw) Sanford of Miami, OK and Madison (Billy McCall) Sanford of Fairland, OK as well as many great grandchildren, nieces, and nephews whom she loved dearly. A memorial service will be held at a later time under the direction of Brown-Winters Funeral Home and Cremation Service, Miami. The family would like to specifically thank Integris Hospice for their amazing & compassionate care for Carol. Memorial contributions can be made to Integris Hospice under the care of Brown-Winters Funeral Home.

Carol Mae (Hill) Sanford, 77, went to be with Jesus on Sunday, January 24, 2021 surrounded by her family. Carol was born on March 1, 1943 in Clay Center, KS to Wayne and Ruby Hill. She grew up on the family farm working alongside her Dad. She... View Obituary & Service Information

The family of Carol Mae Sanford created this Life Tributes page to make it easy to share your memories.

Send flowers to the Sanford family.