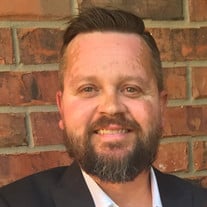 Brandon Dale Oakley, 37, passed on Tuesday, December 4, 2018, in his home in Miami, Oklahoma. After his valliant fight with stage IV Malignant Melanoma. His strong will to live, unwavering faith in God and the loved and prayers of family, friends and many supporters carried him through. Brandon was born March 17, 1981 in Claremore, Oklahoma to Roger Dale Oakley and Johnna Renee Rano. The oldest brother of four children, his brothers Jesse and Garrett and his sisters Britney and Kandace. Known for his ease in frequent conversation with even total strangers, his contagious laugh and his entertainingsense of humor. He was one that once you met him you never forgot him. After graduating from Jefferson High School, Jefferson, Ohio in 2000 he joined the United States Army. He was one of the first boots on the ground in Iraq. As a Sergeant, he was a decorated soldier who earned the Army Commendation Medal with Combat Valor twice, Presidential Unit Citation, Army Good Conduct Medal, National Defense Service Medal, and War on Terrorism Expeditionary Medal, War on Terrorism Service Medal, Army Service Medal and Army Lapel Button. After his honorable discharge he attended NEO A&M where he and Mackenzie met. Brandon loved to golf, take hiking trips with his buddies and socialize with both friends and strangers. Those left to carry on his legacy are his wife of eleven years Mackenzie Alysse (Boyd) Oakley, his two children that were his pride and joy, his son Ryder Oakley age 10 and his daughter Blake Oakley age 7, other survivors include his parents, Roger Dale Oakley, his mother Johnna Renee Rano and her husband Gary, his brothers Jesse Mann and his wife Shana, Garrett Rano, his two sisters, Britney and Kandace Oakley, his nieces and nephew and Mackenzie’s parents Steve and Mona Boyd. Mr. Oakley will lie in state with the flag he fought for draped over his casket at Brown-Winters Funeral Home and Cremation Service in Miami on Sunday, December 9, 2018 starting at noon. There will be visitation hours from 4:00 PM until 6:00 PM. There is a Celebration of Life at 2:00 PM, Monday, December 10, 2018 at First Christian Church with Pastor Leon Weece officiating. Brandon will be laid to rest at Mount Hope Cemetery in Afton. The American Legion Funeral Honors Team will provide Military Honors. Casketbearers will be Garrett Rano, Jesse Mann, SSG Jeff Journeycake, Erick Estep, Danny Crippen and Jerry King. The family has asked that memorial donations be made to the Ryder and Blake Oakley Education Fund that has been set up at First National Bank in Miami. Those may be in care of the Brown-Winters Funeral Home and Cremation Service or a donation may be made on Brown-Winters website by clicking on the payments & donations tab at the top. Friends and family may leave notes of encouragement to the Oakley family on Brandon’s Tribute Page at www.brown-winters.com. Lastly, the entire family would like to thank Integris Hospice Team for everything you have done during his final battle. #BrandonsBattle

Brandon Dale Oakley, 37, passed on Tuesday, December 4, 2018, in his home in Miami, Oklahoma. After his valliant fight with stage IV Malignant Melanoma. His strong will to live, unwavering faith in God and the loved and prayers of family, friends... View Obituary & Service Information

The family of Brandon Dale Oakley created this Life Tributes page to make it easy to share your memories.

Send flowers to the Oakley family.