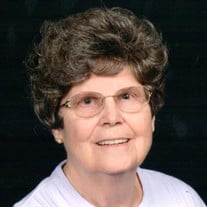 Barbara June Kenyon was born to Nolda J Walker and Herbert F. Durbin on January 7, 1934 in Palms, Los Angeles County California and departed thus life on Saturday, August 14, 2021. The First twelve Years of her life were spent in Southern California where her parents had migrated during the depression. There she attended grade school. In 1946 the family moved to Clovis, New Mexico where she spent the next years of her life during which she met and married Thomas Otis Kenyon in 1952. Two children were born to them, Thomas Otis, Jr. and Nancy Ellen before they moved to Delaware County, Oklahoma in 1956. While in Jay, They were blessed with two more children, Areta Suzanne, whom her father nicknamed “Suzette”, and John Mark. Barbara was Den Mother and assistant Den Mother for the Cub Scouts during this time; also working to organize the Girl Scouts. She worked for the Delaware County Journal and the Hamburger King. She was also church pianist, Sunday school teacher and Children’s church leader in the Assembly of God. In 1963 they moved to Grove where she spent the remaining years of her life. During this time she was also church pianist, soloist, and Sunday school teacher. She worked as a sub in the school cafeteria, worked at Long’s Resort, sold Tupperware, and worked at T&O Propane Gas Company one summer. While the children were in grade school she also volunteered for home room mother for each of her children’s well as assisting with eye and ear exams. While working at Betty Ann Nursing Home she took classes and received her Food Service Supervisor certificate. She also went to night classes to get her GED. She worked at Grove General Hospital and the Natural Light lamp factory, retiring from the Grove Nursing Center in 1997. After the death of her husband in 2004, she volunteered at the Grand Lake Villa, reading to and visiting with the residents there. She volunteered with the Genealogy Dept. of the Grove Library and did online indexing with Ancestry.com and Family Search. She was preceded in death by her husband of fifty-two years; daughter, Nancy; her parents; a brother, Don Durbin, and a sister, Paula Benigar Smith. She is survived by three children, Tom Kenyon of Bartlesville, Areta Treece of Tulsa, and Mark Kenyon of Grove; five grandsons, Paul Treece, Drew, Levi, Matthew, and Jonathan Kenyon, one granddaughter, Shanna; nine great grandchildren, Calista, Logan, Treece; Madison, Waverly, Jaxton, Pyper, Jaydon, Zoe Kenyon; a sister; Bertha Needham, Grove, and Brothers, Herbert Durbin of Owasso, Joseph Durbin of Wyandotte, and Dan Durbin of Newton, KS plus many nieces, nephews, great and great-great nieces and nephews. Private graveside services are under the direction of Brown-Winters Funeral Home and Cremation Service, Fairland, with Reverend Buddy Lairson officiating. She will be laid to rest beside her husband and daughter, Nancy in Memorial Park Cemetery, Tulsa. Friends and family may send the family notes of encouragement by viewing Mrs. Kenyon’s Tribute page at www.brown-winters.com.

The family of Barbara June Kenyon created this Life Tributes page to make it easy to share your memories.

Send flowers to the Kenyon family.