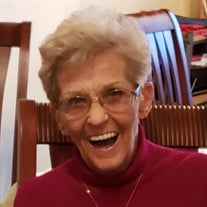 Barbara Jean Booth passed away at the age of 90 on December 8, 2021. She was surrounded by family at her home (overlooking the Neosho River) in rural Fairland, Oklahoma. She was born on September 20, 1931 in the small town of Tri Mountain in Upper Peninsula Michigan to Richard and Aunie Carlson. As a young adult Barbara moved to Southern California where she would meet her husband, lifelong partner and love of her life, Tony Booth. They married in Hollywood, California in 1953 and moved to Oklahoma to enable her husband to attend the College of Pharmacy at the University of Oklahoma. After his graduation they moved to California where her husband's career as a Pharmacist and small business owner flourished as did their family. Together they had six children. Barbara stayed busy raising the family and working in the family owned drug stores in McCloud and Fall River, California. After her husband's retirement the couple returned to Oklahoma, living in Miami and rural Fairland where she lived the remainder of her life. Earlier this year the couple celebrated their 68th Wedding Anniversary. Barbara was fun loving and loved to travel. She was kind, gracious and loving to everyone she met. She was a joy to know. Family meant everything to Barbara and she cherished time and memories created through the years with her children, grandchildren and great grandchildren. She was the anchor and glue to her family and a devoted wife and mother. She was active in the American Legion Auxiliary, Pilot Club and the Homemakers Club. Barbara was preceded in death by her parents Richard and Aunie Carlson; a son, Jim Booth; granddaughter, Cierra Yates and her brother, Robert Carlson. Those who will share Barbara's memory are her husband, Tony; her children: Michael Booth (Chris), Bill Booth (Penny), Tena Booth, Terri Calvin (Todd) and Mya Liberty; her grandchildren: Aaron Booth, Brandy Booth, Melinda Brenes, Nathan Booth, Troy Booth, Zac Booth, Haley Booth, Sarah Smith, Bethany Birkenbuel and Amy Francis. Also surviving are her great grandchildren: Morgan Booth, William Long, Owen Yates, Gracie Yates, Joseph Yates, Adrian Brenes, Isaac Brenes, Lucas Booth, Daniel Booth, Mackenzie Booth, Brooklyn Knox, Kaylin Knox, Sophia Francis and Vivian Birkenbuel. A small memorial service will be held on Thursday, December 16, 6pm at Brown-Winters chapel in Miami, Oklahoma. Friends and family may send the family notes of encouragement by viewing Mrs. Booth's tribute page at www.brown-winters.com.

Barbara Jean Booth passed away at the age of 90 on December 8, 2021. She was surrounded by family at her home (overlooking the Neosho River) in rural Fairland, Oklahoma. She was born on September 20, 1931 in the small town of Tri Mountain in... View Obituary & Service Information

The family of Barbara Jean Booth created this Life Tributes page to make it easy to share your memories.

Barbara Jean Booth passed away at the age of 90 on December 8,...

Send flowers to the Booth family.