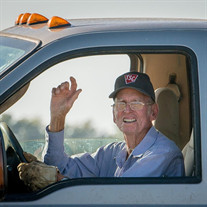 Arthur A Morgan Sr. 84-year-old lifetime area resident passed away at home Thursday April 23, 2020 in Rural Afton. Arthur was born on April 29, 1935 in Wyandotte, Oklahoma to Frank and Alma (Wright) Morgan. He married Fayrene (Brock) on January 24, 1954. He graduated from the Afton High School in May of 1954. After high school, he proudly served his country in the United States Air Force in the Korean War. When Arthur returned home, he graduated from Northeastern Oklahoma A&M College in Miami, Oklahoma. Together they ran a successful farm and dairy operation. He retired from milking cows in 2009. He continued to run his cow/calf operation for his entire life. Arthur also worked for over thirty years as a letter carrier for the United States Postal Service in Miami, Oklahoma. Arthur was a lifelong member of Narcissa Baptist Church, where he was baptized at the age of twelve. He was an avid outdoorsman who loved to hunt and fish, as well as feeding his cows and working on the family farm. He was also the president of the Afton Booster Club. Above all Arthur was a proud father who loved his family. Arthur was preceded in death by his sister Shirley Morgan, parents Frank and Alma Morgan, and his brother Francis Morgan. Arthur is survived by his wife of 66 years Fayrene of the home, son Arthur A Morgan Jr. and wife Deanne of Afton, Oklahoma, daughter Susan Elaine Boyd and husband Stephen of Afton, Oklahoma, brothers Jake Morgan and wife Alberta of Miami, Oklahoma, and Gil Morgan and wife Bronwyn of Afton, Oklahoma, sisters Mary Grimes and husband Gerald of Miami, Oklahoma, Vetta Stoops and husband Nub of Commerce, Oklahoma, and Almeda Caroll of Vinita, Oklahoma and brother in law Johnnie Brock and wife Sherry Brock of Bluejacket, Oklahoma. Arthur is also survived by four grandchildren, Brad Michael Morgan and wife Cody of Afton, Oklahoma, Holly (Boyd) Martinez and husband Antonio of Phoenix, Arizona, Keri Leigh (Morgan) Ramsey and husband Chey of Fairland, Oklahoma and Jordan Boyd and wife Kylee of Miami, Oklahoma. Arthur is also survived by his great grandchildren Garret Morgan, Ziya Martinez, and step great grandchildren Carter Ramsey, Dawson Ramsey, and Eli Boyd. Arthur is survived by numerous nieces, nephews, and other family members and friends. Graveside services will be held at 2:00 p.m. on Monday April 27, 2020 at Sixkiller Cemetery in Afton, Oklahoma, with Gary Rhodes and Leon Landrum officiating. Serving as pallbearers are Arthur Morgan Jr., Stephen Boyd, Brad Morgan, Chey Ramsey, Garret Morgan, and Jordan Boyd. Serving as Honorary pallbearers are Antonio Martinez, Carter Ramsey, Dawson Ramsey, and Elli Boyd. In lieu of flowers, donations may be made in memory of Arthur A Morgan, Sr. Class of 1954 to the Afton Alumni Association.Notes of encouragement for the family may be left at www.brown-winters.com

The family of Arthur A Morgan created this Life Tributes page to make it easy to share your memories.

Send flowers to the Morgan family.