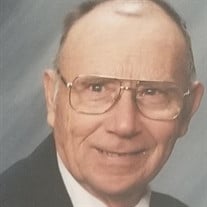 Argel Curtis Gross Born April 30 1933, passed from his earthly time January 27 2020. He was preceded in death by his parents Elmo and May Gross, a brother Frank Snow, an infant brother Sylvester Gross, his first wife Alice, and his second wife Lois. He is survived by two sons, Andy Gross, Allen Gross and his wife Cheryl. Step daughter Christy Thorpe; two step sons Rick Bradley, Greg Bradley and his wife Jen. Sister Gwen Foreman and husband Jim. Two grandchildren Alicia Grindstaff and husband Joe, and Matt Gross and wife Jessica. Also a host of nieces, nephews, cousins, church family, and many many friends. Argel was born in Fairland Oklahoma. He graduated from Fairland High School in 1951 and attended Graceland College in Lamoni, Iowa. He also served our country in the US Army. He married Alice Enix in 1957 and had two sons Andy and Allen. They had a small acreage where he raised a variety of livestock and crops, along with their boys. He also enjoyed building and repairing things and believed that helping others was essential in life. His love of God and his service to Him was undeniable. His ministry was witnessed by many and because of that he has an immense Church and spiritual family. He retired after 30 years from the BF Goodrich tire plant in Miami, OK. After Alice passed away he remarried Lois Bradley in 1994 and gained a step daughter and two step sons. Shortly after their marriage they moved to Independence Missouri, to pursue God’s work. He loved God, his family, and most everyone he came in contact with. He had a passion for fishing and spending time outdoors. He also served as a patriarch and in the first presidency of his church community. He will be greatly missed by all that knew him. Honorary Pallbearers: Matt Gross, Joe Grindstaff, Dan Weber, Logan Brown, Mark Stunkard and Jim Musgrave. There will be visitation from 1:00 PM until 2:00 PM, on Saturday, February 15, 2020 at Brown-Winters Funeral Home and Cremation Service in Fairland. There will be a Celebration of Life at 2:00 PM on Saturday, Febraury 15, 2020 at the Brown-Winters Funeral Home and Cremation Services Chapel in Fairland. Services are under the care of Brown-Winters Funeral Home and Cremation Service in Fairland. Friends and family may send the family notes of encouragement by viewing Mr. Gross’ Tribute Page at www.brown-winters.com.

Argel Curtis Gross Born April 30 1933, passed from his earthly time January 27 2020. He was preceded in death by his parents Elmo and May Gross, a brother Frank Snow, an infant brother Sylvester Gross, his first wife Alice, and his second... View Obituary & Service Information

The family of Argel Curtis Gross created this Life Tributes page to make it easy to share your memories.

Send flowers to the Gross family.