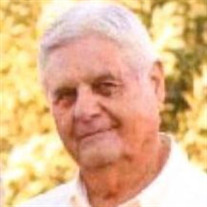 Adolph Loehr, a resident of Grove, Oklahoma was called to his heavenly home on Tuesday, June 15, 2021. Adolph was born on January 4, 1925 at home in Fairland, Oklahoma to John and Agnes (Lindsey) Loehr. Adolph attended high School at Fairland High before joining the United States Army during World War II, proudly serving in the 13th Armored Division "Black Cats". He married Louise Detherage on September 25, 1945. This marriage was blessed with four children Anthony, Randolph, John and Patricia. Adolph was a lifetime member of Saint Paul’s Lutheran Church in Fairland faithfully serving as Elder, and various other capacities. Mr. Loehr began working for BF Goodrich in 1946, retiring in 1980. He owned Loehr Motor Company in Miami and worked passionately on his cattle ranch until 2006. On January 11, 2003, with the blessing of his family, Adolph married Nancy Stark. Not long after they would settle in Grove, Oklahoma where Adolph would remain active and involved in the community. As a member of Grove Citizens Police Academy Alumni Association, he was honored to serve as president at one point, and continued involvement with VIPS (Volunteers in Police Service). He enjoyed a multitude of hobbies and interests, an avid history buff, always a car enthusiast, a voracious reader and collector of WWII memorabilia to mention a few. Adolph was truly a loving, devoted family man and his faith and family were always his priorities, a true gentleman. Adolph was preceded in passing by his parents, his wife Louise, daughter Patricia and granddaughter Tricia Loehr. He is survived by his wife Nancy, sons Dr. Anthony Loehr and his wife Annette of Tulsa, Randy Loehr and his wife Debbie of Sumner, Texas, and John Loehr and wife Renee of Ronan, Montana, step children Michael Stark and his wife Sandi of Miami and Susan Blalock of Miami. Visitation will be from 6:00 PM until 8:00 PM at Brown-Winters Funeral Home and Cremation Service in Fairland on Sunday, June 20, 2021. Services will be 10:00 AM, Monday, June 21, 2021 at Saint Paul’s Lutheran Church in Fairland with Reverend Leo Schroeder officiating. Interment will follow at the Fairland Lutheran Cemetery under the care of Brown-Winters Funeral Home and Cremation Service in Fairland. Friends and family may send the family notes of encouragement by viewing Mr. Loehr’s Tribute Page at www.brown-winters.com.

Adolph Loehr, a resident of Grove, Oklahoma was called to his heavenly home on Tuesday, June 15, 2021. Adolph was born on January 4, 1925 at home in Fairland, Oklahoma to John and Agnes (Lindsey) Loehr. Adolph attended high School at Fairland... View Obituary & Service Information

The family of Adolph Loehr created this Life Tributes page to make it easy to share your memories.

Adolph Loehr, a resident of Grove, Oklahoma was called to his...

Send flowers to the Loehr family.